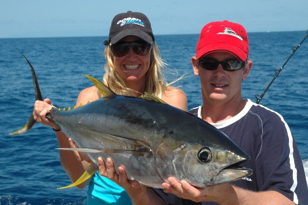 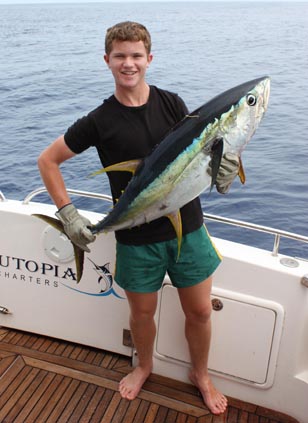 Yellowfin Tuna are found in the cleaner waters around Myrmidon and the outer local Reefs and during the summer months are sized up to around 80lb.  These are a great fighting fish and will give you a good work out.  If you would like to catch some of these tremendous fish Utopia Charters have some of the finest remote fishing packages you need to catch these fish of a life time.

The Yellowfin tuna (Thunnus albacares) is a type of tuna eaten by humans as food.  It is found in open waters of tropical and subtropical seas worldwide, though not in the Mediterranean Sea.  It has been reported to be up to 239 cm (94 inches) in length and 200 kg (440 lb) in weight.

Yellowfins tend to school with fishes of the same size, including other species of tuna, and larger fish are often seen with porpoises, whales and whale sharks.  Yellowfins eat other fish, crustaceans, and squid.

Commercial fisheries catch Yellowfins with encircling nets, as well as with rod and reel.   The fish are sold mainly in frozen or canned form, but are also popular as sashimi.

Yellowfin is also popular in restaurants as the primary protein in an entree; - presented in much the same fashion as fine red meat.  It is preferably cooked seared to rare to medium-rare.  Cooking this fish medium to well-done destroys its delicacy, juiciness and flavour.