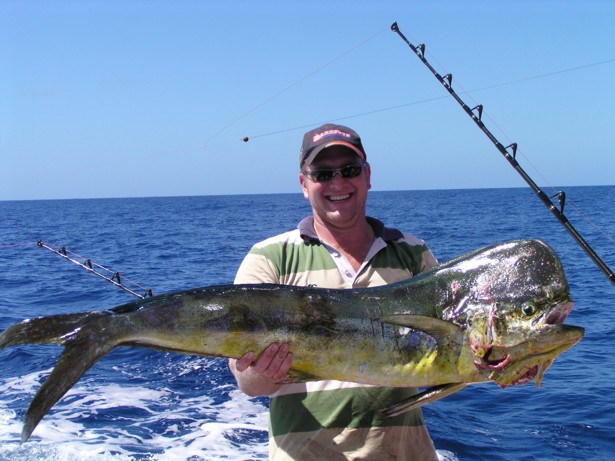 Dolphin Fish frequent the cleaner waters around Myrmidon and the outer local Reefs all year round and are often caught closer in around the Bowling Green Bay grounds during the Marlin season. These are a great fighting fish and will give you a good work out on light line with spectacular aerobatic displays. If you would like to catch some of these tremendous fish Utopia Charters have some of the finest remote fishing packages you need to catch these fish of a life time.

Mahi-mahi are carnivorous, feeding on flying fish, crabs, squid, mackerel, and other small fish. They also have been known to eat zooplankton and crustaceans.

Mahi-mahi are highly sought game fish throughout their range because of their beauty and fighting ability. Their flesh has excellent flavour and firm texture. Mahi-mahi have become popular restaurant fare in many areas, sometimes eaten as a substitute for swordfish because, having scales, they are considered kosher.

One of the fastest-growing fish, mahi-mahi are thought to live no more than 5 years; their swimming speed is estimated at 50 knots. Mahi-mahi spawn in warm ocean currents throughout much of the year and its young are commonly found in sargassum weed.