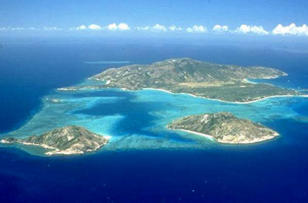 Lizard Island is situated North of Cooktown near the top of a series of reef systems that run for approximately 150 nautical miles South to Cairns where every year the big  Black Marlin of the Pacific Ocean migrate to spawn and are found in numbers on the outer edge, in the Coral Sea.
Stories of massive fish stealing Mackerel from commercial fishermen's lines in the early 60's captured Captain George Bransford's imagination and it was he who, eventually in 1966, weighed the first fish over the 1,000 pound mark and the mighty Black Marlin fishery was born.

Since that first fish the world’s finest fisherman and new comers to the sport every year travel to this area on game boats like Utopia.  They live aboard these vessels on the Great Barrier reef to maximize the time to target these monster fish.  It is the only place in the world where the Giant Black Marlin are known to congregate each year.  The Ribbons Reef, along with the waters north from Townsville, has become the most popular destination in the world if you want a real chance of catching a fish over that 1,000 pound mark.
Bookings are now available for our recommended 4 to 8 plus day charters for the 2010 Giant Black Marlin season (late Sept thru Dec)
Enjoy all the comforts attributed to mother shipping when staying on this large vessel with a professional crew and onboard cook/hostess.

Transfers can be arranged and are available from Cairns, Cooktown, Lizard Island or as far south as Townsville if wishing to start or exit your trip at alternative locations.

For Packages call number below.